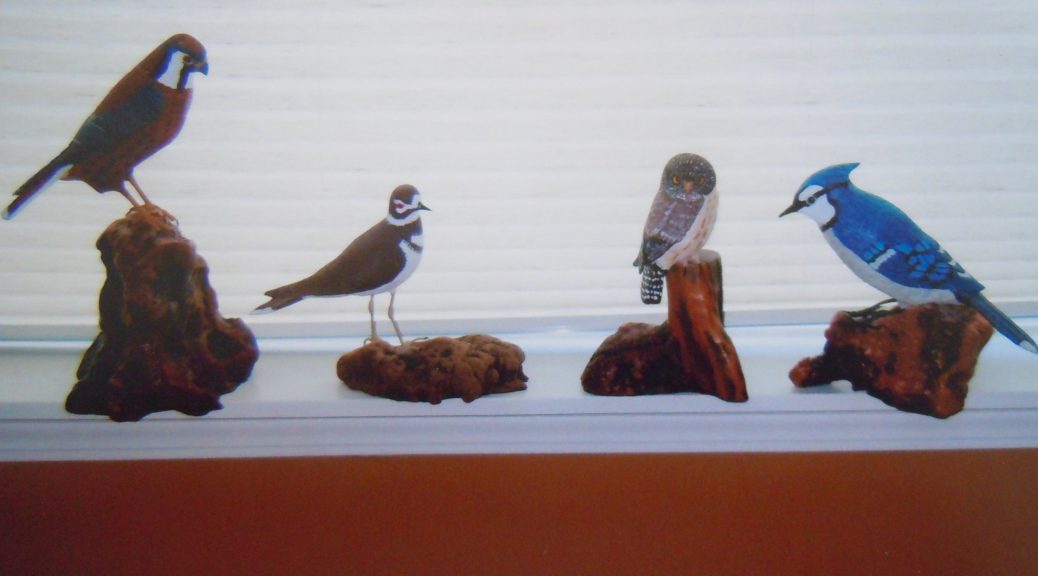 We are never too old to begin.  Lary Hansen, retired Canadian Air Force, is the perfect example of this. “As a child, my mother told me I didn’t have a creative bone in my body.” Lary smiles. “She was quite surprised when I first showed her my work.”

Lary started carving birds when he was 66 years old.
Some people develop their talents later in life.

Lary’s delight is both contagious and inspiring. He is living proof that we can break free from what we thought to be true. And you are NEVER too old to begin.   Lary began with a Dremal tool, within a few years he was knife carving.  Now there is no stopping in sight. His bird carvings have become an important part of his life; he will not part with them. Lary sells his wood burnings; and gifts this work on occasion. He has many requests for his art. It is true joy to be a recipient of this work! 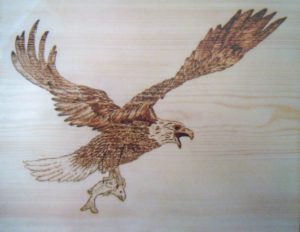 “My first wood burning was of a bald eagle with a salmon in its talons. I wanted and needed something to do in the winter months that my wife and I spend in California. The beauty of the bird and how nice it will look when I have finished the project motivates me. I also enjoy the praise that friends and family give me when they see my completed project. I particularly liked showing my art to my Mother.” (this is where I insert a huge smile! Lary, you are an example for us all!)

I asked Lary to share about his creative journey.   He is a member of a carving group that “used to always do the same bird each winter.”   Eventually 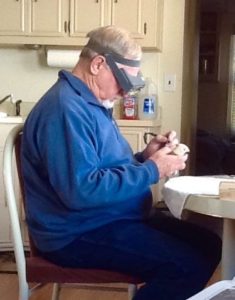 Lary began to make personal decisions as to what bird he would carve. “I try to choose birds that are resident either here in the south west or in British Columbia. “  Lary tries to do a wood burning of each bird he has carved. He also does quite a few Native American motif burnings based on patterns from the Pacific Northwest. “I get a great deal of enjoyment and relaxation from the wood burning. When I am home in Canada I normally listen to cool jazz while I am burning.”

If discouragements arise when a carving isn’t going the right way,
Lary is not hesitant to reach out. 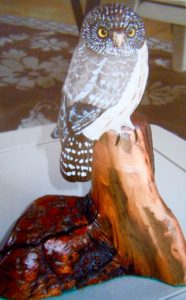 “I have a group of friends that I call upon. I also have a mentors, one in the South and another at home in Nanaimo, Canada who help me out.”

What does Lary suggest to someone who wants to begin his or her own creative process?
“Go to seniors centers, craft groups and other neighborhood associations for help or ideas. Check out libraries

, they are  wealth of information, check the Internet, ask your friends.  And remember. You are never too old to begin.

Lary is also an avid Native American flute player. Pictured is a wood burning he created for Rona Yellow Robe.  Lary may be retired but he doesn’t lack for purpose in his life!

(c) Diane L. Mathias, 2016. All rights reserved. This is part 2 in our series, The Inner Creative Process.    Photos are Lary’s own work.

One thought on “Never Too Old to Begin: The Inner Creative Process of Lary Hansen”

There are no upcoming events at this time.